The Bigg Boss 14 finale week saw many twists and turns and a few surprising eliminations, leaving viewers in shock. Pavitra Punia and Aly Goni had to leave the show after losing a task. The next contestant to be eliminated was Nikki Tamboli who received the least number of votes while Rahul Vaidya chose to walk out of the house, citing he was feeling homesick. While Rubina Dilaik and Jasmin Bhasin joined Eijaz Khan and Abhinav Shukla as the finalists, six new challengers in the form of Vikas Gupta, Arshi Khan, Rahul Mahajan, Manu Panjabi, Kashmera Shah and Rakhi Sawant were sent inside the house. Also Read – Bigg Boss 14: ‘I am married, not doing this for publicity,’ says Rakhi Sawant sharing her husband will reveal his identity before they have babies

Last week, we also saw Aly and Nikki re-entering the house. And now, Rahul has, too, has again entered the show after his voluntary exit. This brought back many of the original Bigg Boss 14 contestants together. They have all had a tremendous journey inside the Bigg Boss 14 house. We saw people fighting, commenting on personal stuff, throwing personal attacks, throwing tantrums, and whatnot. A lot of times we also saw them bickering over kitchen duties. It seems like they did not like to work in the kitchen. While some have been particular with their duties, some weren’t which led to fights. Also Read – Bigg Boss 14: ‘My equation with Eijaz Khan was never fake, the feelings were genuine, but can’t call it love,’ says Pavitra Punia

We saw the contestants losing it and drifting from the game and we also saw some solely going inside the house for the purpose of entertainment. All of them have had their own journeys. So, we had conducted an audience poll on these six contestants, viz., Rahul Vaidya, Nikki Tamboli, Jasmin Bhasin, Rubina Dilaik, Abhinav Shukla and Eijaz Khan – to determine whose journeys the audience liked the most till now. Also Read – Bigg Boss 14: Do you feel Vikas Gupta’s eviction was a fair decision from the makers? Vote Now

The poll results are finally out and viewers have chosen Rubina Dilaik (42% votes) as the most entertaining contestant after Rahul Vaidya (21% votes) and Jasmin Bhasin (13% votes). Eijaz Khan secured the fourth spot with 9% of the votes while Nikki Tamboli settled into the fifth position with 8% of the votes. Abhinav Shukla came in at the last spot with 7% of the votes. 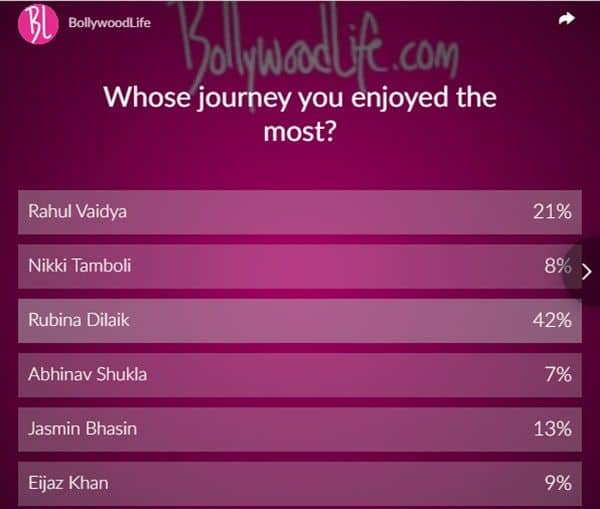 Keep watching this space for latest updates on Bigg Boss 14.